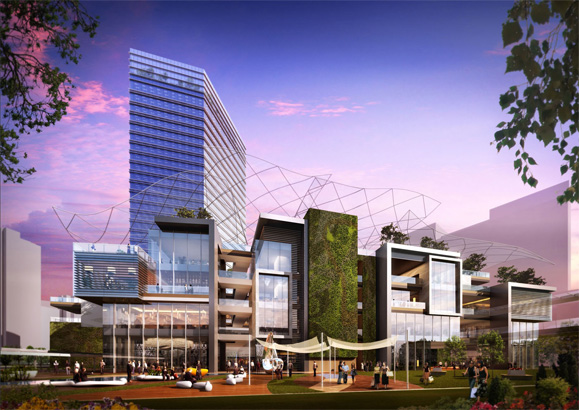 The Singapore Government has released its plan to bump up the island's population to 6.9 million people by 2030. This population explosion may spell out better times ahead for S-REITs in general. But there is a handful of S-REITs that are already in good posture to reap immediate benefits from Singapore's incrementally booming population today. REITsWeek highlights two S-REITs that are already in good standings to ride on this increased human traffic.

The plan to bump up Singapore's population to 6.9 million people is still largely at its initial stages and S-REIT prices are unlikely to reflect the changes anytime soon. But one of the initiatives in this master plan that is already under way is the government's push to develop the western part of the island into a thriving commercial and business centre. CapitaMall Trust is in good posture with several properties in this area and are already seeing healthier human traffic levels than in previous years.

One of the shiniest landmark in the west of Singapore today is JCube, a lifestyle mall under CapitaMall Trust that has been positioned as an entertainment hotspot. The mall houses a cinema, eating establishments and Singapore's only Olympic-size ice skating rink.

A short walk away is IMM, positioned as a very focused shopping centre that houses niche service providers such as furniture retailer and wedding ateliers.

But most importantly in May 2011, CapitaMall Trust took a 30% stake in a JV to develop a prime land parcel at Jurong Gateway. The site is directly connected to the bustling Jurong East MRT station, one of Singapore busiest transportation node with a very high volume of human traffic. The development, christened the Westgate, will house a 594,000 square feet 7-storey mall that is projected to welcome its first shoppers by Christmas 2013.

CapitaMall Trust's constellation of 3 shopping malls in close vicinity of one another is the Retail REIT to be on should an investor wish to capitalise on the increased human traffic in this region.

Accompanying the Westgate shopping mall will be an office development known as the Westgate Tower. From 2015, Westgate Tower will house all staff under the Capitaland Group who are currently working in different parts of the island. Judging from past precedence, Westgate Tower is highly likely to be taken under the wings of CapitaCommercial Trust- one of Singapore's premier Office REITs.

Westgate Tower, being just one of a handful of Grade A office space in the west, looks poised to benefit from the government's effort of turning this area into a commercial centre designed to ease up on the human traffic in the central business district.