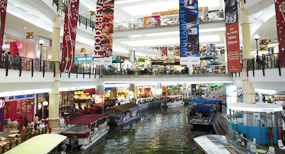 Malaysia-listed pure-play retail REIT CapitaMalls Malaysia Trust (CMMT) has reported a distribution per unit (DPU) 2.21 sen for its 2Q 2014, 1.8% higher than the 2.17 sen for the corresponding period in 2013.

In tandem with the higher DPU figure, CMMT also announced that it has achieved a net property income (NPI) of MYR51.2 million for the quarter, 1.4% higher than the MYR50.5 million for 2Q 2013. Correspondingly gross revenue for the quarter came in at MYR78.2 million, a 4.9% increase from the MYR74.5 million reported a year ago.

Managers for the REIT has attributed the increase partly due to the full-quarter contribution from the newly configured units of Phase 1 of the asset enhancement works at East Coast Mall. The property’s NPI rose by 3.8% year-on-year despite the fact that it was undergoing asset enhancement that involved the closure of some retail space for reconfiguration.

Another CMMT property, The Mines, locked in property income growth of 14.2% year-on-year for the quarter.

Moving ahead, the REIT expects its performance to remain strong in line with a projected growth of 4.5% to 5.5% for the Malaysian economy.

“Private consumption is expected to remain strong, underpinned by healthy labour market conditions and continued wage growth. Thus, despite the higher cost pressures, we are confident that our portfolio of well-diversified necessity malls will continue to deliver a stable performance in the second half of this year”, said David Wong Chin huat, Chairman of the REIT’s manager.