Latest
You are at:Home»News by Topic»Capital»ESR-REIT to raise up to SGD150 million for acquisition, enhancements

Singapore-listed ESR-REIT has announced an equity fundraising exercise to raise up to SGD150 million via the private placement, and preferential offering tracks.

The placement will see the issue of approximately 195.0 million new units to selected investors at between SGD0.515 and SGD0.525 each, raising gross proceeds of not less than SGD75.0 million.

This placement is subject to an upsize option, and will raise up to SGD100.0 million for the REIT.

Another SGD75.0 million will be raised via the preferential offering route, although a structure for this has yet to be decided by the REIT.

Missing out on information beyond mainstream media reports?
Login or sign-up for a free 25-day trial here. 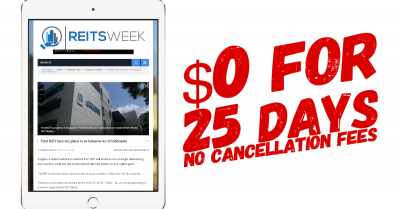